The fair will assemble close to 1,500 students from 250 public and private schools in Claiborne, Copiah, Hinds, Jefferson, Madison, Rankin and Warren counties. Students from grades 1-12 will present projects in the areas of science, mathematics and technology.

Qualified judges should have a master’s or equivalent degree or a minimum of five years related professional experience to judge projects in the lower fair (grades 1-6). Upper fair (grades 7-12) judges and should have a Ph.D., M.D. or equivalent degree or a minimum of eight years related professional experience.  College juniors, seniors and/or graduate students may judge in the lower fair upon advisor recommendation and fair official approval.

First, second and third place winners from grades 7-12 will advance to the Mississippi Science and Engineering Fair on March 26, also at Jackson State University.

Interested persons may register online at www.jsums.edu/scifair  (click the “Judge” section near the top of the screen).

The Jackson State University Division of Student Life is set to host the 59th Annual Conference of the National Association of Student Affairs Professionals (NASAP), Jan. 31 – Feb. 2, at the Jackson Marriott Hotel.

NASAP is a professional organization dedicated to promoting excellence in the area of Student Affairs.

“During this conference, through collaboration with fellow colleagues, we hope to explore answers to the challenges we all face as student affairs professionals. Sharing our successes and failures will help us to become better at what we are charged with doing: helping our students become productive and successful citizens,” said Dr. Marcus Chanay, Vice President for Student Life at JSU and conference chair.

The annual conference provides a forum for professional growth and development for all who are involved in or work with students in the student affairs profession, and is open to professionals in higher education in general and to the nation’s business industry. Undergraduate and graduate students and student leaders from member schools are also welcome.

NASAP was founded in 1954. With a varied membership spanning across academic, administrative, corporate, and student affairs boundaries, the organization offers a variety of resources, and experiences.

The use of water in McAllister/Whiteside Residence Hall will be temporarily suspended between 10 a.m. and 5 p.m. on Wednesday, Jan. 30 as necessary repairs are made. All residents may use the water facilities in Transitional Hall.

Meyers said JSU’s entire community is “excited” about the project as it is an opportunity to continue to address the educational needs of the Jackson-metro area. The campus will accommodate non-traditional students by offering evening, weekend and online courses.

“We’ve looked at the demographics of our area. The fastest-growing segment of learners is the 25- to 35-year-old group. These are the people who work, who have children, but still have educational aspirations,” Meyers said. “We want to enable them to conveniently have the opportunity to fulfill those aspirations through our programs at Jackson State University. This can be a valuable resource to developing a workforce for the whole state of Mississippi.”

Meyers said the purpose of the meeting was to discuss JSU’s plan for a Madison branch. Butler also was informed that the new location’s programs would be geared toward non-traditional students and that classes would start in the summer.

“That was a thrill for me. I have long admired her, and I’m impressed with her leadership. We shared our plan. We continue to look forward to a fruitful relationship with Madison, the surrounding counties and cities and the leadership,” Meyers said.

During the Jan. 10 meeting, Butler asked the university to be mindful of the signage protocols within the city of Madison. Meyers said the university would respect all of the city’s signage regulations.

Meyers said she left the Jan. 10 meeting with the impression the city supported the plan. No concerns or objections had been expressed, Meyers said.

Meyers said the campus programming is still evolving. She said some of the programs offered will be selected, in part, based on how they tie into long-term, state economic development plans, such as Blueprint Mississippi. The focus could include health care administration, public policy and business.

“As we learn more about the aspirations of the students in that area, we will try our best to accommodate them,” Meyers said.

Meyers also explained that the Madison location fits into the university’s enrollment management plan. She said the university would like to open other campuses throughout the metro Jackson area over the next three to four years to give the community more educational options.

The Jackson State University Region of America Reads-Mississippi celebrated the Martin Luther King Jr. National Day of Service by serving with Stewpot’s “Green” initiative. Volunteers enhanced the organization’s teen center, the “Hut,” clothes closet and the food pantry. They also worked at Lake Elementary School helping to finish construction of its outside classroom and tutoring stations. 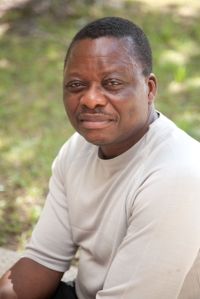 (JACKSON, Miss.) – Jackson State University professor Bennett Odunsi has recently become one of 10 recipients of the 2012 Topp’s African-centered Scholars of the Decade Award.

The awards are given to researchers who have built, nurtured and inspired communities of scholars to seriously investigate African issues. The award is named after the Egyptologist, Pan-Africanist and Mau Mau activist Mwalimu Baba Joseph “Topp” Wallace. The 2012 awards were given out at the 30th Annual Conference of the Association of Third World Studies convened at Berry College in Rome, Georgia.

Odunsi is an associate professor of public policy and administration. His research interests are in human resources, public policy and criminal justice. He has presented papers in Asia, Europe, Africa and several other major national conferences in the U.S.  He has published in the Journal of Third World Studies, Journal of Asia and African Studies and Journal of Global Awareness.  Other scholarly endeavors included publication in conference compendiums, several book chapters and a book. His current work is on comparative administrative law systems.

Sponsored by the Jackson State University College of Public Service School of Social Work, the three-day conference will focus on the theme, Community Engagement: Toward Ensuring Successful Children, Youth, and Families. The event will feature local and national experts who will provide the latest information on issues affecting vulnerable children and families.

A fixture in the TV news industry for 25 years, Carter overcame great odds to achieve his success. He grew up poor without a father in NYC’s South Bronx neighborhood. His mother, a paranoid schizophrenic who had been in and out of state psychiatric institutions, physically and sexually abused him.

Carter went on to become one of New York’s top political reporters, interviewing the likes of Nelson Mandela, Bill Clinton and Donald Trump. As a victim of childhood sexual abuse, Carter’s life story has been told in Oprah Winfrey’s magazine and on the Nancy Grace show.

Carter currently works as a political commentator at RNN-TV, and has appeared on national TV programs including “Face the Nation,” “Hardball with Chris Matthews,” CNN, MSNBC and the Fox News Channel. His awards include the Samuel P. Peabody Award for his vision, innovation and dedication to children and families.

Other speakers include empowerment speaker, author and life coach Johnetta McSwain-Clay and University of Georgia social work professor Alberta Ellett, who is editor of the Journal of Public Child Welfare.