(JACKSON, Miss.) – Tiger fans locally and across the country have something new to roar about.

Jackson State University has launched a TV and radio sports network that will reach an expanded radio audience and enable fans to enjoy home games on television and online.

“It was a major undertaking,” said Wesley Peterson, athletics media relations manager for JSU.  “We’ve been planning about a year for a 2013 launch, but we moved up the timetable and quickly tied everything together over the summer.”

JSU’s sports coverage on radio previously was provided through an outside agency that handled everything from the technical set-ups, travel to games and finding on-air talent. By launching its own sports network, JSU now controls all aspects of its sports properties, Peterson said. 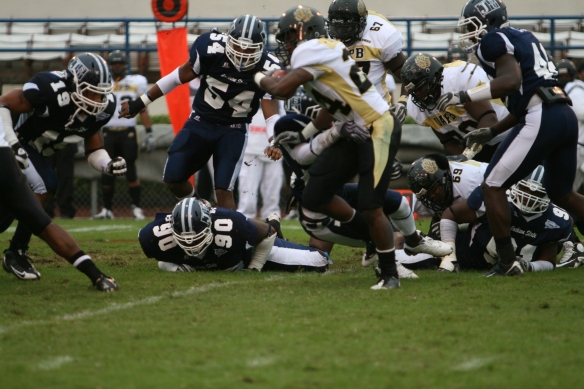 The delayed broadcasts, which will be televised immediately following the real-time games, will be followed by a JSU-TV produced show featuring game highlights and analysis by Tiger Coach Rick Comegy.

Spencer McClenty, JSU’s new media coordinator, has tapped his talent for announcing for both the video and radio broadcasts. Collins produces the broadcast

Peterson said preliminary results have been very positive.  “It’s gone very well so far; not a lot of hiccups.”

The new sports network also expands the number of radio stations that carry all JSU home and away games live from six to 12. About 30 stations will carry at least three or four homes, Peterson said.

The network, however, is not limiting its sports programming to football. According to Peterson, all JSU sports, from baseball to volleyball, will be covered for free online viewing.

“The kids love it,” Peterson said. “It’s been a labor of love, and it’s exciting to see the growth and direction we’re headed.”

The Tigers take on Texas Southern at Houston on Saturday, Sept. 15. Fans should go to jsutigers.com for broadcast schedules.