Jackson State University physics professor Serguei Goupalov has been named a KITP scholar by the Kavli Institute for Theoretical Physics (KITP) at the University of California, Santa Barbara.

An assistant professor of physics in the Department of Physics, Atmospheric Sciences and Geoscience, Goupalov conducts research in physics of low-dimensional systems such as carbon nanotubes and semiconductor quantum dots.

KITP is one of the most renowned institutes for theoretical physics in the world. It was founded in 1979 by Nobel Prize laureate Walter Kohn and is currently directed by Nobel laureate David Gross.

Goupalov will serve as a KITP scholar from 2010-2012. He will participate in a program for visiting researchers in theoretical physics during the summers of his award period. The purpose of the program is to support the research efforts of faculty at non-major-research institutions through extended stays at KITP during the summer months.

Goupalov was chosen as a KITP scholar along with six other scientists.
“The selection committee was very impressed by Dr. Goupalov’s application,” said KITP director David Gross in statement.

Jackson State University received a $50,000 grant on February 17 from State Farm insurance to help lure more students into high-tech careers.
The grant will benefit the university’s Computer Science Department, which plans to use the money to help establish a computational thinking course, a computing innovation lab and a State Farm scholarship program.

“As state and university budgets face cutbacks in tough economic times, State Farm believes it is more important than ever to support our youth and help prepare them for future careers,” said State Farm Systems Manager Rob Wilburn.

The Systems Department at the Bloomington, Ill.,-based company chose to provide Jackson State University with the $50,000 grant as one of its 2009 priority schools.

The overall goal of the grant to Jackson State is to increase the number and preparation of academically talented undergraduates completing the baccalaureate degree in computer science through program enhancement and scholarships. The university also plans to teach the concepts of computational thinking to students in all disciplines.

JSU senior guard Garrison Johnson has been named the Southwestern Athletic Conference Player of the Week for the third time this season after, two stellar performances against the conference’s two Texas teams. The Smyrna, Ga. native, averaged 23.5 points, 5.5 rebounds and 1.5 assists in the two big road wins over Prairie View A&M and Texas Southern.

The Jackson State Tigers had to bring their hardhats and lunch pails when they battled with the Texas Southern Tigers in an ESPNU televised game Monday night. The Tigers won a physical game 70-67 in overtime at the H&PE Arena on the TSU campus. It was their 8th win in a row.

Garrison Johnson scored a game high 27 points to lead the Tigers to the victory. He connected on 8-22 field goal attempts, 7-18 in threes. Tyrone Hanson followed with 18 points and nine rebounds. Phillip Williams chipped in 12 on 4-4 shooting. Rod Melvin dished out six assists and had two steals.

With the win the Tigers improve to a 14-11 overall record and a 12-1 SWAC mark, putting distance between themselves and the rest of the conference. TSU falls to a 12-12, 8-4 record.

Jackson State will return to action Saturday, Feb. 20, at 4 p.m., when they travel to Grambling State to take on the Tigers.

LeMarch Humphrey was honored at the JSU basketball game on Feb. 6 by JSU President, Ronald Mason, Jr, the campus NAACP, and several others. He spoke to the large crowd on hand, saying that he only did “what was right.”

From the Clarion Ledger
Story by Heather Civil 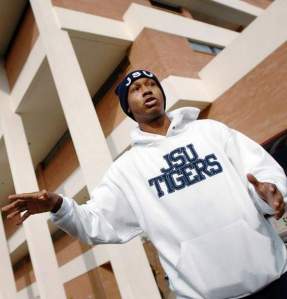 Second, the gunman had bad aim, he said.

Third, LeMarc Humphrey ran toward the sound of gunfire instead of away from it, Scott said.

Humphrey, a 21-year-old computer engineering major at Jackson State University, heard shots and rushed to the aid of Andrea Scott behind the John A. Peoples Science Building on Monday night.

Andrea Scott, 36, was shot twice in the head in a dimly lit parking lot behind the science building. She’s a research chemist at JSU.

As Bill Scott sat in the hospital waiting room Wednesday, he teared up when talking about Humphrey.

“Our country is in desperate need of repair, and when you find a man like LeMarc, you see he was an American and he did something above and beyond the call of duty,” Bill Scott said.

Andrea Scott told police two, possibly three, men tried to rob her around 7 p.m. as she was leaving work. She told her husband the gunman shot her when he found out she only had $5.

No arrests have been made. Police have only a vague description of one suspect – 5-foot-6 and wearing a brown skull cap and blue coat.

Scott had just gotten off the phone with her husband to tell him she was on her way home. She is in fair condition in the intensive care unit at University of Mississippi Medical Center.

For his help, Bill Scott wants to see Humphrey nominated for the Presidential Medal of Freedom. The medal is the highest civilian honor and is typically awarded to citizens who have impacted history.

Humphrey smiled sheepishly when asked about the Medal of Freedom. He said he doesn’t think he deserves that kind of recognition.

“Wow. It’s something kind of big for something so small that I did,” he said.

Humphrey stayed with Scott and called campus police for help.

“Anybody could have done the same thing,” LeMarc Humphrey said Wednesday. “I just made one call.”